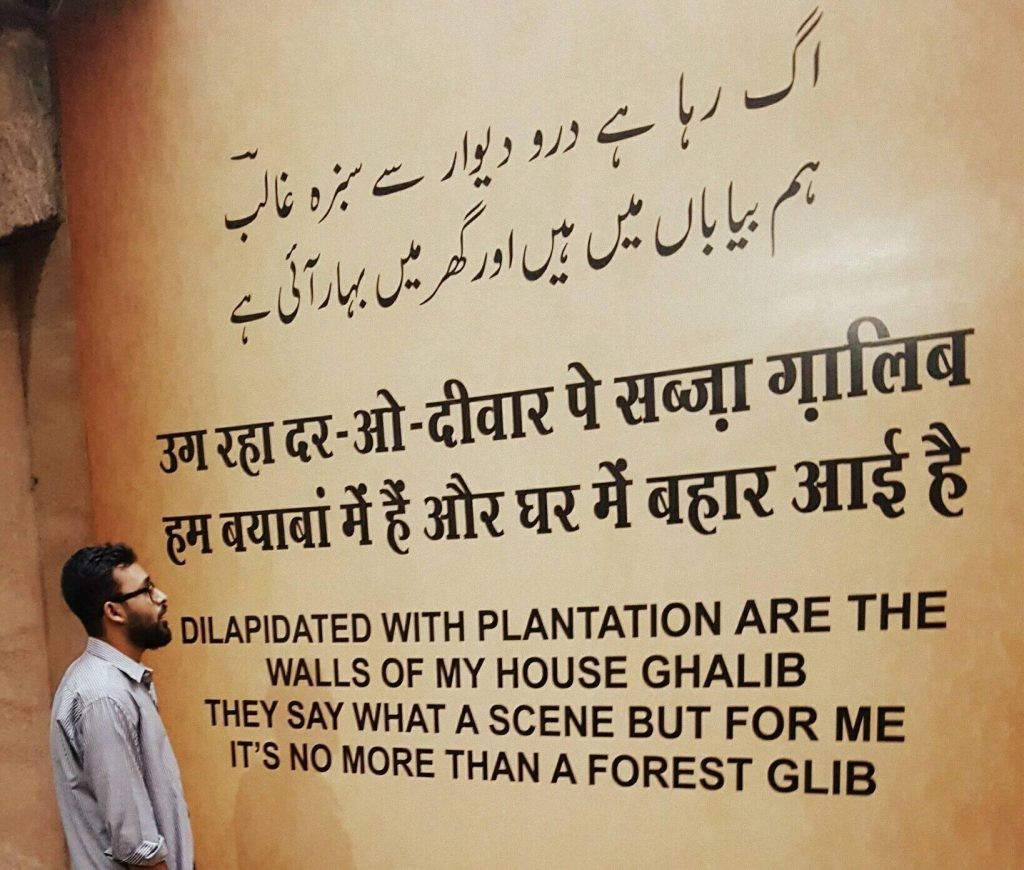 The city struggles with the idea of how to perceive poetry- that is if there is any poetry to be perceived at all. And when I say this, I do not wish to stretch my arms so much that I touch Adorno and Arnold, lest do I wish to fall on my knees in front of the likes of Oscar Wilde and D.G. Rossetti.  Obviously, I will concern my musings with the current generation only- ‘tradition’ is a heavy term and ‘established’ comes with a lot of baggage- not necessarily bad at times – but definitely and more often than not- decisive. More often than not, writing about writing seems like a job cut for the devil himself.

Translation and Touchstones are two words, every avid reader and even a mediocre poet keeps thinking about. Recently I came across Faiz’s prose – his approximation of Ghalib and his letters to his daughters. And from there, I jumped into, what Aijaz Ahmad thought of Ghalib – a brilliant essay on him in the form of an introduction to his translations of, perhaps, the greatest shayar of modern times- close to T.S. Eliot in terms of the newness of his images and in his classicism, to Hardy in his pessimism and to Shelley in his romanticism. So many sensibilities at once, that at times, it is mind-boggling.

“Translation is approximation” – Ahmad writes and kahā hai kis ne ki ‘ġhālib’ burā nahīñ lekin/ sivā.e is ke ki āshufta-sar hai kyā kahiye turns into ‘who has said that Ghalib is not bad; but / Except that he is mad, what else can you say?’

Sanity, in my opinion, is always overstated. Madness can always have various interpretations and if one looks around sitting in Patna, one always finds Rajkamal Choudhary who can be placed on the same line with Manto and Byron. He concocts a world al la Allen Ginsberg. Like Byron, ‘his madness was not of the head, but of heart.’  Balmukund, a young poet, an avid reader of Choudhary’s Bohemia and his language Maithili, yearns, in similar ways and writes of death and love and desires. “The sun’s warmth, the moon’s calmness/ you should have got everything/ whatever you lost with me- more than that.”

Out of the three new acquaintances, (in terms of their poetry -They have been friends for long and I have been ignorant to look) the second one is, Sudhakar. Apprehension and loss make up a poet and melancholy, well, as Robert Burton says, can be endured only by melancholy; Patna always had plenty.“He wanted to fall in love twelve times a day/ he also wanted that his heart broken twelve times a day.”The existential crisis is always there. Someplace else, he becomes someone else. They remained quiet/ searching for a word/ they could both understand.

Mir-shikar toli on the eastern edges of the city is where you will find bird-sellers and you will see birds you have never seen in your life; the spectacle works and affects. And the name, I wonder, if, has any connection to the famous Urdu poet Mir. The new breed in the city which experiments with Urdu poetry generally disappoints, lacking in sublimity and as a poet friend would say – reading. Rahul, who has recently published a book which has connotations from two different language traditions, shows promise. He is almost ironic when he says: a dream has been established from head to toe/and the masters still want to see what I write.

Translation, one would feel, never satisfies and yet remains a necessity. It has a purpose for existing. Touchstones keep changing, every poet develops his own method and which is, like everything else is, in this post-postmodern world – a dynamic process. The struggles are individual, the findings, epiphanies – Muktibodh would come to mind, with his fantastical labyrinth between existence and physical reality. Asiya once wrote about darkness, not very different from Muktibodh’s – and her perception, in one interpretation would seem very far away from him: had the darkness not been with me / I would never have become one with myself.

A poet does need glasses, I agree, but a poet also has a clean slate in his hand and a lot of gibberish in the head. As a reader, a lot of poetry is there to be found locally – to love – to admire and to relate to – the exploration is necessary.

Anchit can be contacted at anchitthepoet@gmail.com.