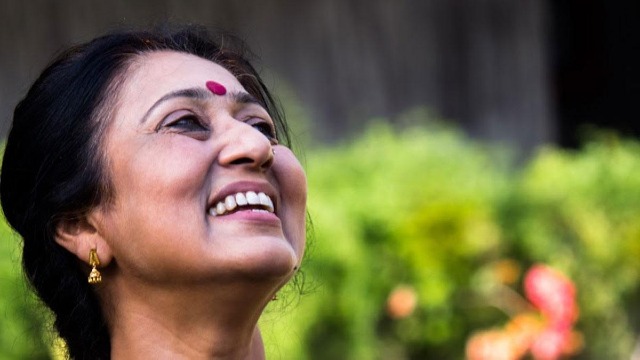 Known for her intellectual deliberations and sentimental excursions of the female psyche among other things, Anamika is one of the major poets of contemporary times. Writing in Hindi, she explores histories, narratives and myths, offering scathing deconstruction of Patriarchy and exploitation of the poor. Recognized for her distinct style and translated into many local and foreign languages, she has won the Sahitya Akademi Award for the year 2020.

I will not translate this space as ‘expansion’,
I will translate it as ‘universe’
as, I have, in this space
left a flying saucer.

Thanks to time,
for my watch is dead.

Thanks to the window,
for right behind its bars
a bird is pregnant!

Wherever everyone is,
I am thankful to all
as right in this moment
all of them are present in me
and I am in them, in parts!

In this ‘emptiness’
There are a lot of things that I have to do.

Now,
I have to translate the wastes of this house
in the language of water

Then I will translate the leftover dishes into
The petals of some white flower.
Then I will reflect for a while-
if I will ever be able to translate a foam-filled sink
into some raga?

Actually, I want to translate this entire house
into some other language
But where will I find that language
except for that language in which
My children speak?

The evening will arrive in all this,
And of this evening I will merely
Translate this much –
I will get up
And open the curtains!

And then
I will translate that space,
not as ‘universe’ but as expansion.
Only Expansion!

The Leisure to Die
(based on a Red-Indian folk song)

Jesus Christ
was not a woman
Or menstruation would
have kept him hanging
Outside the temple since eleven!

In the difficult journey between
Bethlehem and Jerusalem
he would have been raped many times
and his newborns would have spent
forty days and forty nights on the road
squeaking of hunger
Dying one by one–
Jesus would not have found time
to sacrifice himself on the cross.

I searched for happiness
And like a calf behind a cow
Came grief!

Behind the day,
Wobbling came the night
With open hair

But somewhere between these exaggerations
there was something
that remained the same
carrying the flambeau
playing the timbale
singing with joy
“My friend I celebrate my aloofness!”

(Note: The last sentence has been taken from a famous couplet of Kabir by the poet and has been translated in spirit.)

***
Anchit is a poet. He can be contacted at anchitthepoet@gmail.com